CTA’s annual Tech Week was back in-person this year and better than ever. Last year, CTA hosted Tech Week virtually, which included great conversations with policymakers and innovators. This year with the world returning to business as usual, however, CTA moved ahead with in-person festivities to celebrate the power of innovation in our nation’s capital, Washington, D.C.

A significant part of CTA Tech Week is Lobby Day, which involves bringing innovators to meet directly with policymakers. These innovators share their personal stories with members of Congress and highlight the importance of effective public policy in fostering an environment where American companies can thrive.

Members of Congress who attended included Representatives Suzan DelBene, Bob Latta, Jay Obernolte, Fred Upton and Marc Veasey as well as staffers from the House Judiciary Committee, House Energy and Commerce Committee, and Senator Rosen’s office. These policymakers spoke on the importance of passing tech policy supporting broadband expansion and a federal framework for self-driving vehicles. They also discussed the current climate for technology related policy in the halls of Congress, and how a promising future of American-led innovation depends on sensible rules of the road.

CTA’s Digital Patriots Dinner was a great success. CTA member companies, influential policymakers, and notable guests from across the country attended the dinner to celebrate the power of innovation. This year, CTA gave Digital Patriot Awards to Senator Jacky Rosen and the House of Representatives’ Problem Solvers Caucus.

Senator Rosen, from Nevada – the home of CES — has been a tireless advocate for policies that support technology, and was the first computer programmer ever to serve in the United States Senate. Senator Rosen has championed efforts at the federal level to expand broadband access into underserved communities and promote STEM education for students at an early age.

Representing the House Problem Solvers Caucus were the co-chairs of the group: Congressmen Josh Gottheimer and Brian Fitzpatrick. The House Problem Solvers Caucus, comprised of members of congress from across the country representing both political parties, are a fierce advocate for common-sense policies. The Caucus’ work to push for solutions to promote innovation, such as fighting for bipartisan efforts to modernize U.S. infrastructure, fix outdated shipping rules, and combat supply chain challenges warranted recognition through the presentation of the Digital Patriot Award.

CES on the Hill

This year Tech Week concluded with the return of CES on the Hill. This year CES on the Hill, however, for the first time ever, was hosted in CTA’s newly renovated Innovation House —across the street from the U.S. Capitol. CES on the Hill included 15 exhibitors, highlighting a wide swath of areas from digital health, self-driving technology, blockchain, space tech, to the future of home entertainment. 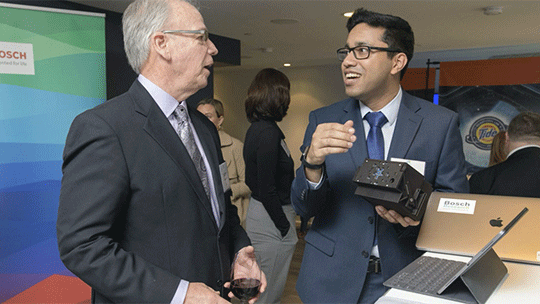 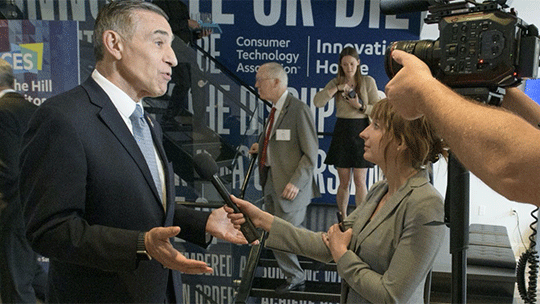 Congressman Darrell Issa (CA-50) talks about the importance of technology at CES on the Hill.

CES on the Hill exhibitors included the following companies:

Exhibitors displayed their innovations and discussed how public policy influences their work. They made the connection that sensible policymaking has a multiplying effect on the development of their products. CTA saw hundreds of government and industry guests attend CES on the Hill this year.

CTA continues to value the importance of Tech Week. Celebrating policymakers that fight for innovators of all sizes is important. Bridging the divide between entrepreneurs and those who write our laws brings a new level of understanding to the work we all do.

Finally, bringing the wonder of CES directly to our nation’s capital helps frame the importance of the global technology industry. It drives home how innovation can address and help to solve big challenges of today and tomorrow, and that innovation needs to be supported here and abroad.