Tesla is worth more than the top 12 automakers together.

Meanwhile, the market share of battery electric vehicles (BEVs) among passenger vehicle sales globally has soared during the pandemic.

The drivetrain of a traditional gas car has over 2000 moving parts. During the pandemic, supply chain challenges have bedeviled auto makers. Missing a single part means the vehicle can’t be produced.

“Lean manufacturing” was introduced in 1991 as a management philosophy. Since then, companies have reduced inventory opting for just-in-time delivery. The theory works perfectly unless of course, the entire supply chain is paralyzed.

Tesla has two advantages over traditional car companies: 1) an EV has only 20 moving parts not 2000 so the vehicle design is significantly simpler. With fewer parts, production is not as vulnerable to supply chain disruption and 2) Tesla is vertically integrated, meaning it produces most of the parts required itself.

There are up to 1400 semi conductor chips in a new gas-powered car. These control everything from windshield wipers to brakes. If a single chip is missing, the car can’t be completed. In 2021, global car production was cut by 11.3 million vehicles because of semiconductor shortages, costing the industry more than $110 billion. 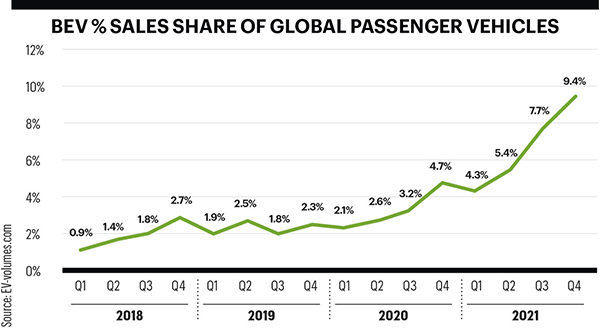 At the start of the pandemic in 2020, auto makers cut semiconductor orders in line with lean thinking. Chip makers allocated product capacity to other industries.

Semiconductors are used in thousands of modern products. Some have high value, and some can cost less than $1. Many of the 1400 semi conductors in cars are cheap, and low margin for semiconductor companies.

The pandemic drove an increase in PC, laptop and consumer electronic sales because of remote working. These products contain high-value chips, so they get production priority.

Two companies control 70% of the market: TSMC (Taiwan, 53%) and Samsung (South Korea, 17%). The next three firms bring that to 90%. New fabrication (fab) plants cost billions of dollars and take years to bring online.

Huawei and other Chinese companies began stockpiling semiconductors once the U.S. banned them from using U.S. designed chips. This reaction increased demand and cut supply. The unintended consequence has crippled U.S. car companies. And a factory fire in a semiconductor foundry in March 2021 further constrained chip supply.

Some analysts look at Tesla’s future product predictions with incredulity: 20 million cars a year by 2030.

But don’t bet against Tesla. It’s the auto firms that traditionally take six years to bring out a new model from research to concept, then design, engineering, manufacturing to launch — that may struggle.

Electrification of the $10 trillion a year transportation market is highly disruptive. I predict that at least two of the top 12 traditional car companies will cease to exist in the next five years. They will either go bankrupt, be bought or merge.

Jim Harris is the author of Blindsided. Follow him on Twitter @JimHarris or email him at jim@jimharris.com.