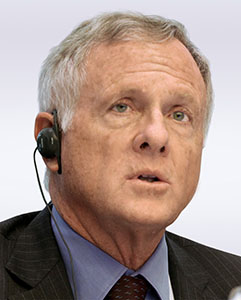 The following article is the second of a three-part series. Ambassador Peter F. Allgeier served as Deputy U.S. Trade Representative from 2001-2009 and U.S. Ambassador to the World Trade Organization from 2005-2009.

"For every complex problem, there is a solution that is clear, simple and wrong”...H.L. Mencken.

This quote could serve as the epitaph for the Trump administration’s China trade policy. While the administration has correctly identified China’s trade policies as a serious challenge for the U.S. and the global trading system, its “solutions” have been “clear, simple and wrong.”

What is the China problem? It is an enormous, state-controlled, non-market economy that discriminates against foreign businesses, engages in industrial espionage and imposes forced technology transfer requirements for valuable intellectual property. In its effort to develop global superiority across a wide array of sectors, it provides enormous subsidies to non-economic enterprises.

The administration has attempted to address the China problem more aggressively than its predecessors. But it has done so through a misguided strategy. Simply put, the administration has acted to “correct” a merchandise trade deficit with China by imposing tariffs on its goods to pressure China to purchase more American industrial and agricultural products. Of course, it’s Americans, not Chinese, who pay the tariffs.

This amounts to adopting the Chinese model of managed trade rather than seeking genuine change in Chinese behavior. For example, the “Phase One” trade deal is basically a Chinese purchase agreement aimed at boosting U.S. exports. Even if it succeeds, it doesn’t alter Chinese behavior in any significant way. It actually reinforces China’s state-driven command economy.

What Can Be Done to Achieve Behavioral Change?

First, we should capitalize on the concerns of other trading countries. The EU, Japan, Australia and others share our concerns and have criticized China for unfair trade practices, especially industrial subsidies and forced technology transfer. They also seek to address non-market-oriented practices that lead to global overcapacity in commodities such as steel. The U.S. should mobilize like-minded countries to develop stronger World Trade Organization (WTO) rules to prohibit these practices.

Second, we should abandon the administration’s evisceration of the WTO dispute settlement process. We had a pretty good record of winning cases against China (e.g., intellectual property protection, Value Added Tax refunds, electronic payment services) but because we repeatedly lost cases over arcane anti-dumping regulations, we threw the entire dispute settlement mechanism overboard. Crippling the entire system is short-sighted. When we win, China has to comply with the rules, otherwise we can retaliate and use tariffs or other punitive measures legally. Instead, the administration imposes illegal unilateral tariffs on China which makes the U.S. the violator

Third, we should take steps, preferably in parallel with the EU, Japan and others, to protect critical technological and security assets from takeovers by Chinese state-supported actors. The Europeans are contemplating new rules and procedures to protect their national champions from Chinese takeovers during a period of low stock prices. In 2018, we tightened Committee on Foreign Investment in the United States (CFIUS) scrutiny of sensitive foreign investments. A coordinated approach with others would be even more effective.

Finally, we should work closely with our allies to develop joint international standards in new technologies to counter China’s efforts to impose their own standards. China has increased its activity in international organizations, notably the International Telecommunications Union and the International Organization for Standards. The EU has proposed cooperation with the U.S. in setting new technology standards (e.g., 5G, robotics and AI) as a counter to Chinese efforts to set global standards. Our trading partners would willingly work with us if we made the effort.