In essence, 4K is now the “normal” TV format. It represents about three-quarters of the market for new TV displays, while the decades-old 1080p format continues to lose share. Simultaneously, 8K sales within a few years will become the second most popular display format. 8K’s growing sales persist despite economic unsteadiness fueled by its ability to display the escalating complexity of video game graphics plus emerging autosteroscopic (no-glasses 3D) and volumetric images integrated with UHD video.

8K delivers four times the video resolution of 4K images and is ready for its close-up. During its growth spurt, 8K will involve “upscaling” or “upconverting” of 4K images and will become part of the advanced TV juggernaut, although its integration with NextGen TV (also known as ATSC 3.0) is still in the early stages.

Initial 8K customers are buying for the “visual experience of the set” especially because they are “entertaining and working at home more now,” says Tom Campbell, chief technologist at Video and Audio Center, a southern California retailer focused on high-end markets. In particular, the upconversion “picture quality is just amazing and a better picture than ever before,” he adds. “Consumers love the quality.”

Steve Koenig, CTA vice president of market research at CTA, agrees that 8K’s early growth will be in big screen sets. By 2024, half of the sales for 65-inch and larger displays will be 8K, and that share will increase, he says. Most of today’s 8K manufacturers only have sets 65-inches or larger and he acknowledges, “It’s a challenging time to introduce products positioned as premium.”

“Stimulus dollars along with funds freed-up by spending less elsewhere combined to lift TV sales to unseasonal highs, particularly in the second quarter of 2020,” the report says.

The CTA forecast also predicts the wholesale prices of 8K sets will drop by about half in the next three years, following the trend of previous HDTV and 4K devices in their first years of widespread distribution. In the case of 8K, the prices may be higher than for previous technologies because the popular sizes will be very large (65- to 90-inches and even larger) — maximizing the value of the extraordinary resolution. CTA’s average wholesale price prediction of 8K displays in 2023 is about $1,500.

Stephen Baker, vice president of Industry Analysis at the NPD Group research firm, believes the “value proposition has moved away from resolution as a primary driver of desire and a mark of technological need.”

Now, he says, consumers are focused on “smart TV, integration with subscription services and operating systems.” Although he recognizes the market for “very high end, very expensive, premium TVs,” Baker expects the mass market will stay centered on the “good enough” products, which he adds are actually “very good.”

Most major TV manufacturers have displayed prototype or early production 8K sets at CES during the past few years. Among them are Haier, Hisense, LG Electronics, Samsung and Sony. Other TV makers developing 8K displays include AU Optronics, Panasonic, TCL and Vizio.

Michael Kadish, director of TV product marketing at Samsung Electronics America, agrees that streaming and games will be major factors in the 8K rollout. “2020 has seen consumers invest in the size and quality of their screen more than ever before,” Kadish says. “43% of U.S. adults say they’re more likely to stream movies. As people spend more time at home in the next year, interest and awareness in larger, and therefore, higher-resolution screens will increase.”

Kadish sees 8K retail prices gradually declining. He agrees that 8K is most appealing in very large screens, and notes, “We see 65- and 75-inches as often hitting the sweet spot of performance versus price.” As for content, Kadish expects native 8K to continue expansion, “with more content providers deepening their 8K offerings and making them more accessible to consumers.”

He believes that Samsung’s AI technology will play a major factor “as that ecosystem grows.” He adds, “We’re continually updating and improving our 8K AI Upscaling engine to make viewing lower-resolution content even more appealing. The next big milestone in the development and acceptance of 8K” is next-generation video game consoles that can handle games developed in 8K.

8K screens display 33 million pixels that are tiny — really tiny — even on supersized screens that are ten feet wide or larger. That means the pixels can show texture as well as color, hue and brightness, the usual core factors of a visual display. Viewers sitting close to the screen can actually see the image — the stitches in clothing, the letters on the page of a book, the details in an avatar — and not be aware of the rectangular pixels making up the image. Blacks are blacker and colors are stronger (or more subtle) than on previous formats. The images are also brighter. For example, Sony’s 8K sets show 10,000 nits (brightness measurement), which is more than double the current brightest displays.

Behind 8K’s UHD resolution is a slew of new technology, especially processors that use artificial intelligence (AI) to upscale and display images. For example: LG’s Alpha 9 Gen 3 8K AI chip uses a six-step process to reduce noise and enhance the picture. Sony’s X1 Ultimate chip uses AI to recognize every object on the screen and manipulate appropriately for the image. Samsung’s AI Quantum Processor 8K also uses AI and machine learning for upscaling and to handle the action on video game displays.

Set-makers are also intensifying their production of other user experience improvements, such as OLED, QLED, High Dynamic Range and processors such as LG’s NanoCell.

These technical capabilities become even more important with the new content that will be part of the 8K landscape. At first, 8K displays are being used to upscale existing movies and TV shows (including DVDs), but much more is in the pipeline. Japan’s NHK network plans to produce and transmit much of the Tokyo Olympics (postponed until Summer 2021) in 8K format, and YouTube is streaming limited content (mainly nature documentaries) in 8K. Marvel Studios produced the 2017 movie Guardians of the Galaxy Volume 2 in 8K.

Japan’s NHK has developed an 8K camera. The number of consumer cameras capable of 8K video will increase, but for now there are only a few devices. Among them are Canon’s mirrorless EOS R5 DSLR camera that can record uncropped 8K RAW at up to 29.97 frames per second. Samsung’ Galaxy S20 smartphone also has sensors and the Snapdragon 865 chipset, enabling it to capture 8K moving images.

“Storytellers like to work within the boundaries of technology,” Lelyveld explains. “Creativity likes limitations, so you have to think how to reach beyond what’s there now.” He believes 8K will be “useful for exploration of images or any sort of reality programming.”

Lelyveld adds, “Artistically, the entertainment industry’s goal is to create engaging experiences. Resolution of the source material is both something you see and an opportunity to explore. For live-action capture, resolution has limited exploration potential. For game-engine real-time-rendered content, the possibilities are infinite.”

Lelyveld expects that the development of 5G wireless delivery will affect the adoption of 8K and other higher resolution formats,” including AR and VR, which doesn’t have a resolution limit.” He also points to AI “not just to create content, but to fill in and correct image problems.” He envisions new technologies, including VR/AR to create new environments that will become part of the new mix in and beyond the “8K rectangle.”

Lori K. Schwartz is also upbeat about VR and volumetric video, a graphic display process that forms a visual representation of an object in three physical dimensions. Such images — often avatars or virtual products — are often blended into a “real” video environment, creating a hybrid presence in which ultra HD backgrounds add to the realism. This visualization is popular in videogames as well as in reality shows. Schwartz cites “Supernatural,” an in-home immersive VR fitness service, in which photogrammetric instructors (based on real, live people) lead customized workouts and can interact with individuals.

Before they move to 8K production, Schwartz, principal at Stritch and a governor of the TV Academy, expects creatives to focus on VR production. She points to the intense expansion of “Web VR” which allow viewers to experience VR in a browser.

One major factor affecting the adoption of 8K displays is how to get video content onto the screen. Near-term use is focused on upconverting DVD and other packaged programming, which the current equipment does effectively. Next up is videogames. Sony’s PlayStation 5 and Microsoft’s Xbox Series X consoles are expected to output 8K graphics this year.

For TV broadcasters, who are rolling out NextGen TV (ATSC 3.0 format), 8K is one of the bandwidth options. “Broadcasters are working hard to ensure that the initial service offering addresses the features of ATSC 3.0 that tested highest in consumer research, most notably advanced video and audio, voice boost and other new features,” says Madeleine Noland, president of the Advanced Television Systems Committee (ATSC).

In its report on standards and recommended practices, ATSC’s Planning Team 4 encouraged “evolvability” to facilitate the launch of future video technologies. It encourages “all stakeholders in the broadcast ecosystem to contemplate and identify additional aspects of industry evolution.”

Samsung has several 8K sets on the market with NextGen TV tuners in a super-premium 8K set, CTA’s Koenig explains, predicting that more NextGen 8K receivers will “trickle out” in the coming year. Of course, there will also be a “broader diversity” of 4K/NextGen sets too, suggesting a “low rise” in sales for the next year, he says.

Given the bandwidth demands of 8K, the cable industry is exploring how to transmit 8K UHD on its broadband networks. Juan Martin, CTO/co-founder of over-the-top platform provider Firstlight Media, is taking a long perspective.

“To understand adoption of new technology, we have to look at screens, content and distribution,” Martin says. “The bandwidth demand for 8K will likely be two to three times that of 4K. That means faster internet connections and higher monthly quotas.”

Martin is focused on ultra-scalable, cloud-based platforms that use AI broadband operators. He believes “digital live experiences” will become one of the most fascinating factors in 8K evolution.

A handful of streaming video services (YouTube, Netflix) are offering some 8K content to viewers who have sufficient broadband bandwidth service — at least 40 to 50 Mbps, although some experts believe that at least 100 Mbps is needed for full 8K signal reception.

NPD Group’s Stephen Baker believes that 8K’s reliance on big bandwidth is a “positive trend.” He explains, “During the pandemic more people are updating their home internet services and, in conjunction with the growth of Wi-Fi 6 and Wi-Fi 6e over the next couple of years, 8K bandwidth issues will not be a gating factor.”

And inevitably, work is already underway on the next great leap in display technology: 16K.

Sony envisions its Crystal LED screen manufacturing technique, previewed at CES three years ago, can be used for 16K theater-sized screens: 63 feet and even wider. 16K screens will have 132.7 million pixels (153608640-pixel density) and four times the resolution of 4K screens.

The pixel wars are far from over.

Learn about the latest video advances including 8K during CES 2021. 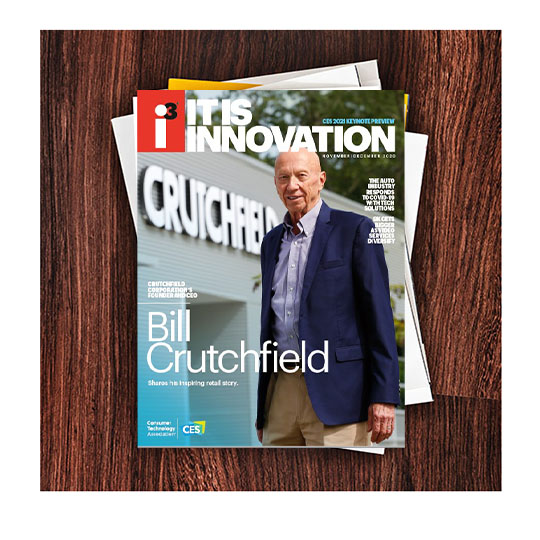