CES was born 50 years ago in New York.

At CES, thousands of new products were on display, including next-gen TVs that manufacturers hoped TV networks, content providers and consumers would support and adopt. New vendors from Asia announced their presence with authority, boldly challenging long, established brands. Innovative portables were unveiled. Innovative car technologies were introduced. Competing standards vied for viability or, better yet, primacy. Attendees included representatives from new types of retailers appealing to a new generation of younger consumers. There were entrepreneurs pioneering new products, new companies producing variations of established products, established companies entering new categories, and a handful of products that defied both categorization and even logic.

This week marks the 50th anniversary of the first CES, held in New York City on June 25-28, 1967 at the Hilton Hotel on Sixth Avenue, the Americana Hotel – now the Sheraton on Seventh Avenue, and a smattering of exhibits at the Warwick and the City Square hotels. Over four days, an estimated 17,500 attendees wandered around 117 booths, viewing more than 10,000 of the latest consumer electronics (CE) products.

Even 50 years ago, CES was all about promoting innovation and previewing the future of technology, a mission it continues to fulfill.

The creation of CES was not only innovative and forward-thinking, it was necessary.

CTA’s forerunner, the Radio Manufacturers of America (RMA), sponsored annual radio tradeshows until the mid-1930s. After the Depression and World War II, with no industry-sponsored tradeshow, electronics manufacturers displayed their wares at other, often inappropriate, trade venues.

But by the mid-1960s, the consumer electronics industry had evolved into an $8 billion a year industry. So, at the 1966 EIA Convention, Consumer Products Division Vice President Jack Wayman convinced the EIA board to sponsor its own exhibition to showcase advancements in a more appropriate industry-sponsored atmosphere.

The premier CE product was television. The aforementioned “next-gen” TV on display at the Hilton and Americana hotels was color, whose state of adoption was just a bit further along than 4K Ultra HD is today.

That first CES came at the end of the first TV season in which all three national networks – ABC, CBS and NBC – aired their prime time lineups in color. TV makers jumped on this long-awaited broadcast acceptance of color by lowering prices on color sets by five to 10 percent. The largest models with 23-inch screens ranged between $500 and $900 – around $3,600 to $6,600 in today’s dollars, even pricer than most of today’s UHD TVs.

Japanese TV makers previewed their first color sets in 1967, challenging established brands like Admiral, RCA and Zenith. Hitachi, Panasonic, Pioneer, Sharp, Sony and Toshiba had recently or were about to open their first U.S. sales subsidiaries, and were just as prominent as exhibitors at the first CES as the many Chinese vendors occupying prominent locations at CES 2017.

Several suppliers had already unveiled the first color TVs earlier in the year with handles, battery packs and telescoping antennas. The screens ranged from four-inches to 14-inches with prices from $199.95 to $329.95 ($1,500 to $2,400 in 2017 dollars) and weighing as much as 40 pounds. Well, they were portable by 1967 standards.

There was also new video tech on display. Eight years before the Sony Betamax and 10 years before VHS were unveiled, Ampex, Concord, General Electric, Panasonic, Sony and others previewed VTRs (Video Tape Recorders) at CES, selling for $2,250 to $4,500. These “home video recorders” had actually been introduced two years before. But given their high price points and awkward reel-to-reel operation, the word “home” was soft-pedaled at CES for these next-gen TV recorders, which were targeted more toward the educational and commercial markets.

In the audio world, the record player, both tabletop and portable, was king – but not for long. 1966 proved to be the peak sales year for all turntable types, its subsequent decline due largely to the emergence of a new music playback format.

In the 1950s, expensive open-reel stereo tape decks appealed only to golden-eared hi-fi hobbyists. In 1964, however, more mainstream four- and eight-track (aka Stereo 8) stereo tape cartridge formats were introduced, followed by Philips' compact cassette and MGM Records' PlayTape format, a 1/8-inch two-track cartridge that held 24 minutes of music in 1966. At CES, all three cassette/cartridge (or CARtridge, to stress the loop format’s auto-centric nature) formats fought for prominence in the first CE format war.

Not only were equipment makers forced to choose sides, but record labels were clearly flummoxed. So, instead of choosing one pre-recorded format, they chose all. Capitol Records, also a CES 1967 exhibitor, released that summer’s number one album, The Beatles’ “Sgt. Pepper’s Lonely Hearts Club Band,” in six different formats: vinyl LP, 8-track, compact cassette, 4-track, reel-to-reel and PlayTape.

At the end of 1967, total U.S. audio tape hardware sales would top 12 million units, more than doubling sales of phonographs. Thanks to its duality as both a playback and recording format, the compact cassette won this first format war and remained the leading audio format until the emergence of the compact disc (CD) 20 years later.

Despite some minor glitches, that first CES was an unqualified success. CES was held at the same hotel venues in New York City for the next three summers before moving to a rebuilt McCormick Place in Chicago in 1971. The modern era of CES began in 1978 with the first winter show in Las Vegas, while the last summer show in Chicago took place in 1994.

Attendance at CES is now 10 times that of the first show, with equal expansion in floor space square footage and the number of exhibitors. Since that inaugural show in 1967, CES has showcased an estimated 700,000 products including every disruptive innovation of the last 50 years such as the personal computer, the VCR, the camcorder, the CD, video games, the cell phone, the internet, satellite TV, satellite radio, GPS, the DVD, big screen/flat screen TV, HDTV, the digital camera, the smartphone, flash memory, Blu-ray Discs, as well as more recent breakthroughs such as the tablet PC, 3D printers, 4K UHD, drones, smart home devices and autonomous vehicles.

“Over the past 50 years CES has evolved as the industry has changed," notes Gary Shapiro, president and CEO of CTA, “reflecting and helping drive the ever expanding consumer tech landscape.” 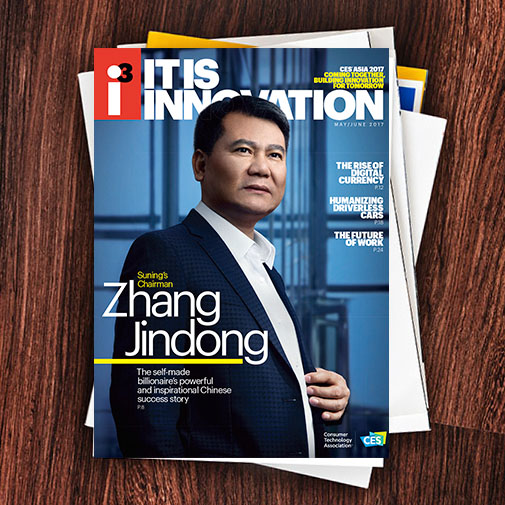