Eureka Park was the most energetic and innovative areas of CES 2017.

Out of the 600 companies all over the Eureka Park Marketplace, it is hard to single out a couple that stood out. In the upcoming March/April issue of i3, we take a look at 10 eye-catching companies from Eureka Park at CES 2017. Here is a sneak peek at four of those companies:

Creating a new form of fitness to boost efficiency, motivation and fun, Moovlab brought its Boxing Fitness 2.0 platform to Eureka Park. The hope for this technology is to digitize boxing, kicking, punching and overall fitness in gyms. Boxing Fitness 2.0 is a hardware and software platform that measures, analyzes, and shares individual and group training sessions. Moovlab is bringing a new dimension of smart and virtual health and fitness through this new platform and will transform the future of fitness. “Moovlab is a startup that creates sensor applications to measure physical activity at fitness centers,” said Moovlab’s Laurent Freytrich. “With our boxing application you can see the number of punches you’ve thrown, the reaction speed, punch speed, acceleration, calories burned and more.” Only in its first year as a company, Moovlab’s goal is to work with fitness centers and transform the way we train into a more connected experience.

Rotex, based in Austin, TX, brought what they call their Electronic Tattoo to Eureka Park, a hair-thin, skin-soft sensor that can be attached to any part of the user’s skin. The temporary electronic tattoo can be worn up to ten days and will never shift against the user’s skin. “Depending on where you wear it, it measures different things,” explained Nanshu Lu, professor at University of Texas, Austin, and founder of Rotex. For example, if a user wears Rotex on their chest, it produces an electrocardiogram of their heartbeat, their respiratory rate and their blood pressure. If worn on a muscle, Rotex not only tracks gestures but produces an electromyogram, or a measurement of electric activity within the muscle, allowing the user to pilot a drone or play a video game via the electronic tattoo. “If worn on the skull, Rotex is capable of measuring brainwaves – useful for epilepsy monitoring or sleep study,” explains Lu. The tattoo automatically detects where it has been placed, and data is transmitted continuously and wirelessly to the user’s smartphone. Rotex plans to begin shipping the evaluation kits – including ten tattoos, one transmitter, and all required software – in summer 2017.

InfiVention Technologies, a first-time Eureka Park exhibitor from Mumbai, India, brought the Square Off smart chess board to CES 2017. With Square Off, users can play chess against either the embedded AI opponent, or a remote, connected user anywhere on the globe. When the player makes a move, the responses are automated, either on the user's board (if playing against the AI opponent), or on the opposing player's board - wherever they might be. The board is also capable of "livestreaming" professional chess matches by making the professionals' moves appear locally on the board, in real time. An accompanying app allows the user to set difficulty levels, play tutorials and tweak other options. "Eureka Park was a great opportunity. We met so many other startups - the networking opportunity was really great," said Aatur Mehta of InfiVention. Square Off was full backed via a Kickstarter campaign launched in November 2016, and won Digital Trends’ Best Cool Tech Award at CES 2017.

Vinci came to CES 2017 as an audio technology company looking to reinvent how users interact with their music. The Vinci and Vinci Pro are biosensing wireless headphones designed to provide an AI-assisted approach to music streaming and listening. Through powerful machine learning, Vinci adapts to user command, preference, and environment to curate an unmatched audio experience. “It connects to the internet and it allows you use music services like Spotify,” said Vinci’s Gina Hughes. “There’s 32GB of storage available on the headphones so you can actually carry your library with you.” With an all-in-one storage encasing, Vinci can be used without a device, empowering on-the-go listening without a secondary device or app. Its advance algorithms are designed to create a customized, real-time audio experience. The headphones also use biosensing software to utilize user data such as heart rate and location, and includes an external panel for visual customization. 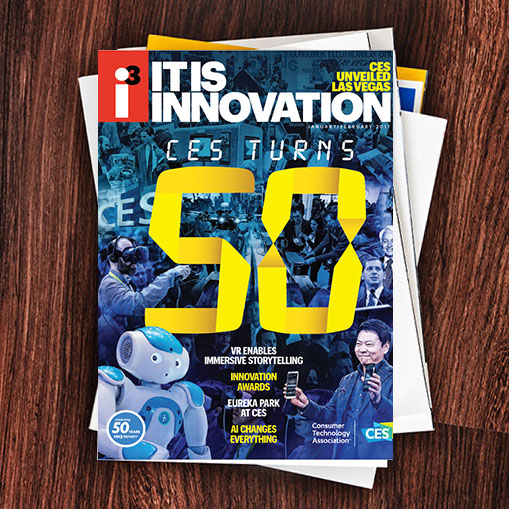