The Best of Eureka Park

A look at a few promising startups from CES

The Eureka Park Marketplace, sponsored by the National Science Foundation and Techstars, is the flagship startup area at CES that provides an exclusive opportunity for entrepreneurs to launch a new product or service. The Eureka Park Marketplace at CES 2018 was the biggest ever with more than 1,000 companies showing off  their original business models. i3 spoke to 10 entrepreneurs, eager to share their innovative ideas.

IMInnov, a French company, showed its connected safety solution for equestrians. The Equisure system combines a wearable device fitted to a rider’s helmet, a GPS sensor attached to the horse’s bridle, and a smartphone app, connected via Bluetooth. IMInnov General Manager and Co-Founder Catherine Chaventré explains: “If the rider has an accident and falls off , then the system will detect the fall, determine the strength of the shock, pinpoint the GPS location of the accident, and send this information in a text message to a preregistered number on the smartphone app.” If the horse continues on without the rider, it can be tracked via the GPS sensor.

AI Mindtronic AI is a mobility platform based on artificial intelligence and 3D vision. The company brings an interactive 3D user interface to vehicles through its holographic cluster “NOAH.” When considering the user experience in a vehicle, “We thought, why not use AI technology to change the user experience and make it greater? Make it safer,” explains Ran Gao of Mindtronic AI. Winner of an Innovation Award at CES 2018, drivers link their smartphone to the vehicle cluster, then use facial gesture control, eye tracking and facial recognition to interact with the technology. Drivers can even start their car with a smile.

Binarybots showcased its robotics kits for children. “We’re trying to help every child from the age of five up learn not only how to code, but also about robotics and the Internet of Things,” explains Chris Burgess. Children build robots using the kits that include cardboard and plastic components, and boards that feature a speaker, light sensor, programmable LEDs and two touch sensors. The kits also include a pocket-sized computer kids can code: the BBC micro:bit. The “Planet Totem” robots launched at CES with a tortoise, crab and spider that each have a specific functionality. “Each of these unique characteristics are important, because the children can own it, play with it and understand that it’s an animal as well as a toy — so it inspires them to build more,” Burgess explains.

NGeno, a Polish startup, showcased the Smart Patch, a tiny sticker that allows users to measure temperature, heart rate, oxygenation and hydrogenation through an app. To start monitoring your vital signs, just stick the patch onto your skin. NGeno’s Dr. Rafal Mrowka says it is perfect for infants, children and amateur athletes. He adds, “This is important because if you have a child, or are an active person, you need to know this info, especially since hydrogenation can have an impact on your wellness.”

Sense Arena from the Czech Republic, showed its virtual reality (VR) immersive training platform for athletes that develops cognitive processes and physical skills using a hockey environment. “We’re showcasing our ice hockey product, which is great from the perspective that the virtual stadium reacts to everything that the player does within it — the stickhandling, the shots, and the passing,” explains Bob Tetiva, project director and managing partner at Sense Arena. Co-developed by Dr. Tomas Peric of the International Ice Hockey Federation and Filip Pesan, head coach of the Czech Republic’s National Junior team, the system combines training software with a HTC Vive VR headset and a Vive controller, attached to a hockey stick. A basketball version is also under development.

Lifedoor’s product is the size of a tiny box, but could save lives during a house fire. The product automatically closes the door it is installed on when a smoke detector goes off, then lights up and sends a push notification to the homeowner. When a door stays closed in a fire, it provides precious minutes by cutting off  the room’s oxygen from being consumed, preventing smoke and heat from entering the room, thus slowing the fire from spreading. “You can only survive a couple of minutes in a house fire because the smoke is so toxic,” says Co-Founder Ben Docksteader. “With your door closed, you can save 10 to 15 minutes. That’s enough time for the fire department to arrive or for you to escape.”

PetMio showcased a smart nutrition system developed for pets that learns their dietary needs and delivers tailored food directly to your home. The system combines the smart tracker — attached to a pet’s collar to develop an activity profile for the PetMio smartphone app — with the smart bowl, a high precision food scale with Wi-Fi and Bluetooth connectivity. “We’re able to understand when your pet is eating, how much they’re eating, and understand the correlation between the inputs and outputs of calories,” explains Pedro Moras, co-founder and CEO of PetMio. This data is then sent to the cloud, where an AI algorithm analyzes it and produces food based on the animal’s specific needs that is shipped to the home. PetMio begins shipping in August.

Drone Interactive, a French startup, gives consumers the chance to pilot a drone by strapping on a VR headset. At their CES booth, players flew the drone around a small cage, shooting virtual insects with a controller and headset as they competed with one another for the highest score. With the VR headset, players get a first-hand, lifelike experience. “When you are flying the drone, you get to see what the drone sees,” says Drone Interactive’s Philippe Onillon, who envisions the technology in amusement parks around the world. They are developing three experiences: an arcade shoot ’em up, a racing game, and a laser taglike experience.

Reach Robotics has a line of robots that take mobile gaming off  the screen and put it in front of you. Mekamon combines a smartphone-controlled robot with augmented reality to translate the robot’s movement into a video game. The robot itself, spider-like and controlled by your thumbs, can perform whatever is going on in one of the many mobile games designed for it, like an obstacle course or a tower defense. You can even have two Mekamons battling it out in augmented reality. “I wanted to change the way people understood consumer robots,” CEO Silas Adekunle says. “We wanted to show people something unique by combining the best of the robotics world with the best of the gaming world.”

Hugsy, a Dutch company, hopes to give new moms a hi-tech way to help their newborns fall asleep. Developed by CEO and Creative Director Sylvie Claes with her university classmates during a sixmonth design project, Hugsy off ers both a blanket and a "smart heartbeat recording device." Since babies are prone to sleep on their mother’s chest, this device reproduces the sound of a mother’s unique heartbeat and vibration for infants who cannot be held. “We’re hoping to simulate that feeling of closeness when a baby needs to sleep in a crib or when parents need to go to work,” Claes says. They plan to first launch in the Netherlands, then the EU and the U.S. 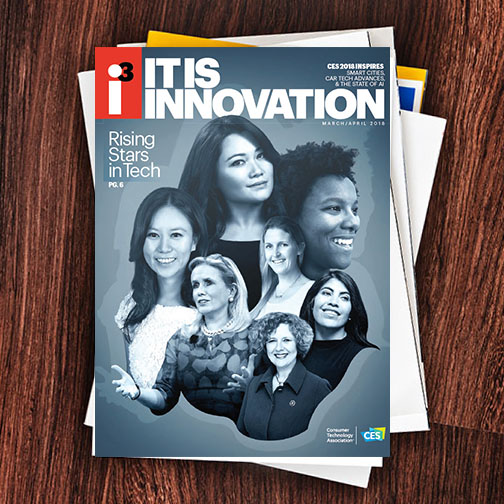